The development and history of the paramedic profession in Israel

Since its establishment the profession has developed considerably and paramedics are currently at the frontier of pre-hospital emergency care in Israel.This article looks at the evolution of the paramedic profession in Israel, considering the introduction of mobile intensive care units and the paramedic's ever changing role in the provision of pre-hospital care.

The paramedic profession in Israel was established in 1979 by Dr Nancy Caroline, medical director of the national emergency medical services (EMS) system, Magen David Adom. Since its establishment the profession has developed considerably and paramedics are currently at the frontier of pre-hospital emergency care in Israel. The training of paramedics in Israel has evolved over the years from a basic course to an advanced, highly specialised course as well as an academic degree. In the past, paramedics worked alongside physicians, but today, the majority of the EMS system is run independently by paramedics and emergency medical technicians (EMTs). The further development of the paramedic profession has even seen paramedics incorporated into urgent care centres, factories and hospitals.

This article is based on historical documents and interviews, and aims to review the history of the paramedic profession in Israel as well as its current status.

The EMS system in Israel

Israel has a national EMS system—Magen David Adom (MDA). MDA is a non-governmental, non-profit organisation that works as a standalone corporation by law. MDA was established during the First World War as an organisation aiding wounded Jews. 1919 saw the opening of branches in Palestine to supply first aid. This was followed by the establishment of an ambulance service in 1931, with the MDA law legislated in 1950, two years after the state of Israel was established. The law specified that the role of MDA was to deliver first aid, and supply blood. Most recently, in 2006, MDA joined the Red Cross. As MDA is the national EMS system in Israel, it is responsible for the training of manpower in first aid, paramedics included (Hadas et al, 1984; Ellis and Sorene, 2008).

Until 1973 the ambulance services provided by MDA were basic and consisted of only transport and basic life support (BLS). The development of the mobile intensive care unit (MICU) by Pantridge saw physician services provided by ambulances in Jerusalem (Pantridge and Geddes, 1967). This saw physicians administering first aid to patients at first aid stations, following triaged calls for cases that were considered more urgent. A similar service was also established in Tel Aviv by Dr Stephen Landes of Tel Aviv Sourasky Medical Center.

The first MICU was staffed by hospital physicians, nurses, and an EMT/ambulance driver from MDA, working in 24-hour shifts. A lack of enthusiasm by MICU nurses saw Dr Landes open an advanced course for EMTs to replace the nurses in MICUs. This ‘European’ model of services was used until the adoption of the American model, which led to the introduction of paramedics (Wacht, 2013).

A major change in MDA occurred when Dr Roni Rozin was introduced to the paramedic profession while visiting in the United States. Together with Elitzor Kfir, the general director of MDA, Dr Rozin invited Dr Nancy Caroline to Israel for counsel on improving the services of MDA.

Dr Caroline was a specialist in emergency medicine in the US and one of the pioneers of EMS and the paramedic profession. She worked with Dr Peter Safer in the well-known Freedom House Paramedic Program. Her book Emergency Care in the Streets was, for many years, the only textbook for paramedics and is still being used today (Caroline, 2002). When Dr Caroline immigrated to Israel she became the medical director of MDA (Baskett and Safar, 2003) and worked to import the paramedic course from the United States to Israel. Together with Dr Arie Merchav, a surgeon from Tel Aviv, Dr Caroline started the first paramedic course in Israel. The first course had 20 students, with medics from MDA and the Israel Defense Forces (IDF), among others (Figure 1). Dr Caroline did not know Hebrew, so a translation of the whole course was done by volunteer physicians. Dr Mickey Eisenberg, now director of King County EMS, arrived in Israel 6 months after Dr Caroline and helped her to develop the paramedic course. 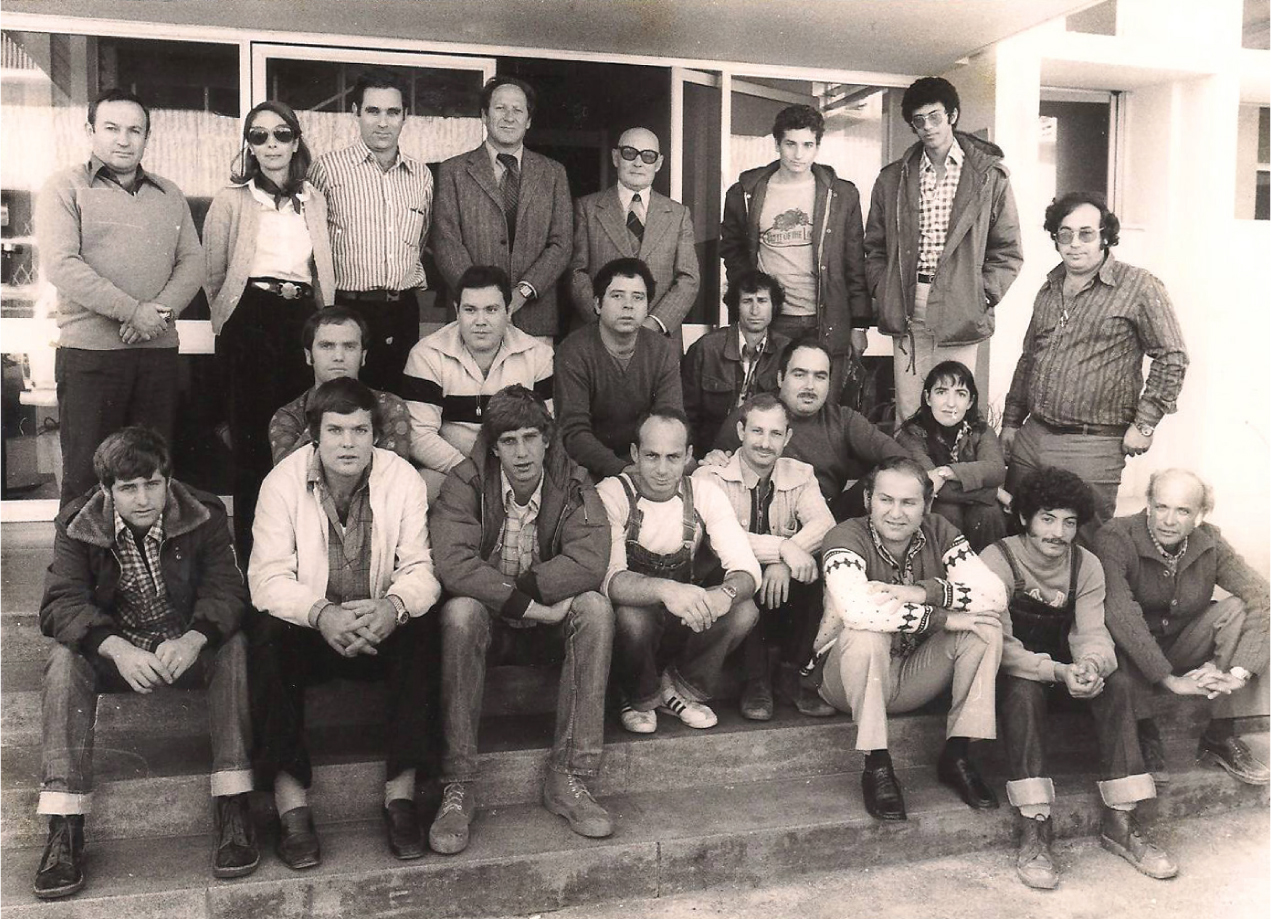 Figure 1. Students from the first paramedic course in Israel 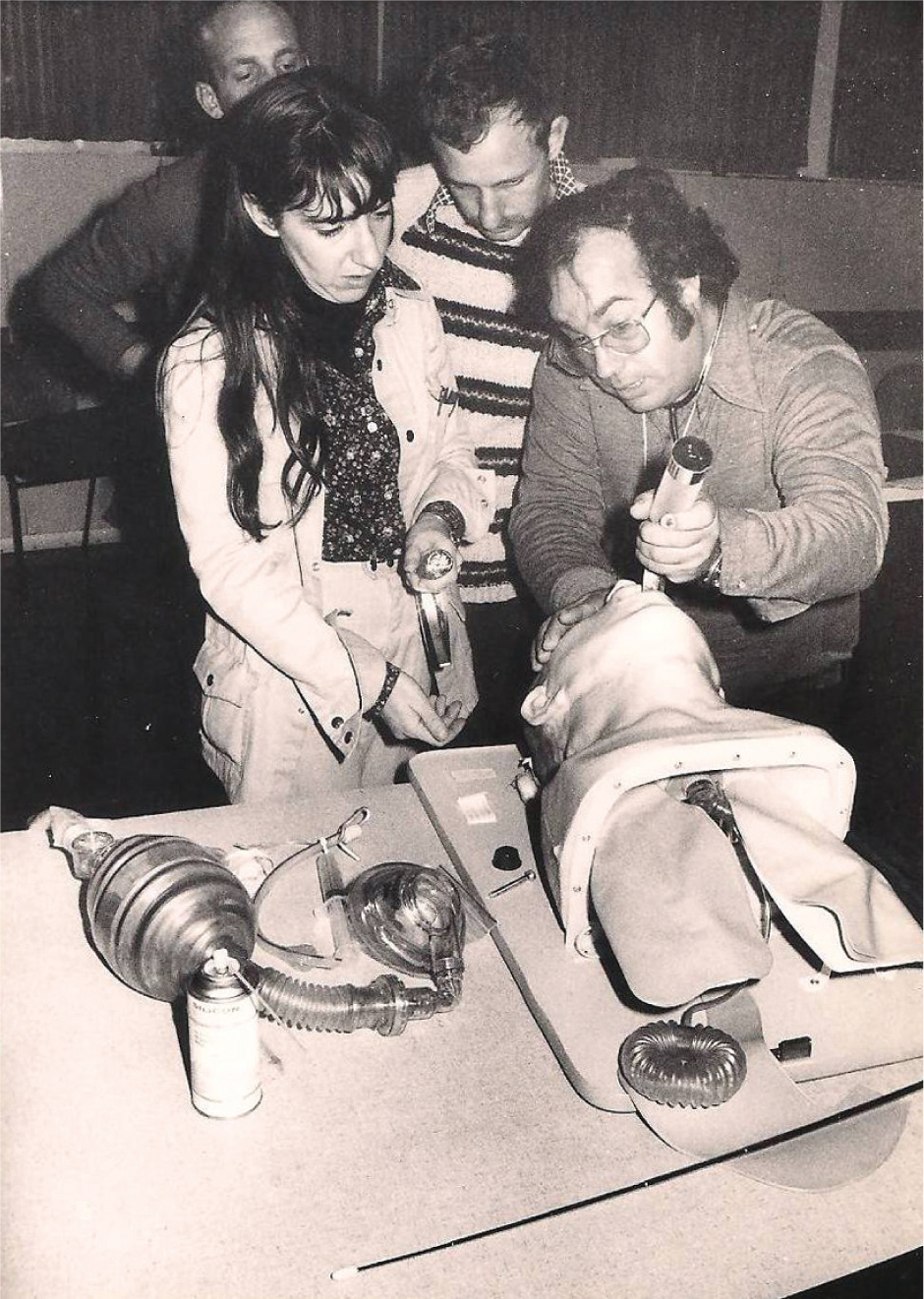 The first paramedic course was eventually opened in 1980, a year after Dr Caroline immigrated to Israel. Six months of class-based training was followed by training placements in hospitals and ambulances for a year. Most of the classes were taught by cardiologists from Hasahron Hospital. It was a challenge training the new paramedic students in hospitals due to resistance from staff, but Dr Caroline was able to convince prominent physicians of the importance of hospital-based training for paramedics.

Further resistance was seen from the Israeli Ministry of Health, who initially did not approve of the new profession. It was only following long negotiations that a physician from the Ministry agreed provide signatures for the certificates of training completion.

After the course ended, some of the newly qualified paramedics returned as instructors within the EMS system. MDA was going through a structural change, shifting from operating stand-alone EMS stations to a more centralised managerial and operational head office. This change allowed, among other things, the incorporation of the concept of the MICU to stations outside of Jerusalem and Tel Aviv (Wacht, 2013).

The MICU in Israel incorporated a unique model of paramedics providing services alongside physicians. This presented some unique challenges as the paramedics were trained under the American model to work independently. Culturally, the concept of a physician on every MICU was deeply rooted in the Israeli public and there was an expectation of treatment by a physician whenever an MICU ambulance arrived (Hadas et al, 1984).

Despite the utilisation of paramedics in practice, the Ministry of Health still refused to recognise the paramedic profession, claiming that the level of training in Israel was inferior to the training in the United States. In response to this, an Israeli-trained paramedic was sent to the United States for practical exams and training—where he performed well with high scores.

Soon after, Dr Caroline left MDA to continue her work in Africa before returning to Israel to pioneer the hospice movement. She continued to volunteer at MDA until her untimely death from cancer in 2002, at the age of 58 (Baskett and Safar, 2003).

The 1980s saw pairs of paramedics given the freedom to work independently whenever a physician was unavailable. As more MICUs opened around Israel, the presence of senior physicians in ambulances were replaced with the presence of intern physicians, which meant that the paramedic was usually the most experienced team member in each ambulance.

In 1994 there were only 12 MICUs across Israel. The first MICU without a staffed physician was officially opened in Carmiel (a city in the northern part of Israel). The Carmiel MICU had limited protocols and medications, while medical control was monitored over the phone in real time. These protocols were expanded over the years as medications were made available and medical control shifted from phones to a sophisticated real-time monitoring system, via a dedicated control centre staffed with a physician and a paramedic. In 2013, after a long debate, paramedics were finally allowed to stop CPR and certify death without the presence of a physician (Yafe et al, 2011). Since 1994, the number of MICUs has seen a sixfold increase and there are more than 60 MICUs to date. As of 1 January 2015, there are no longer ambulances staffed with physicians. 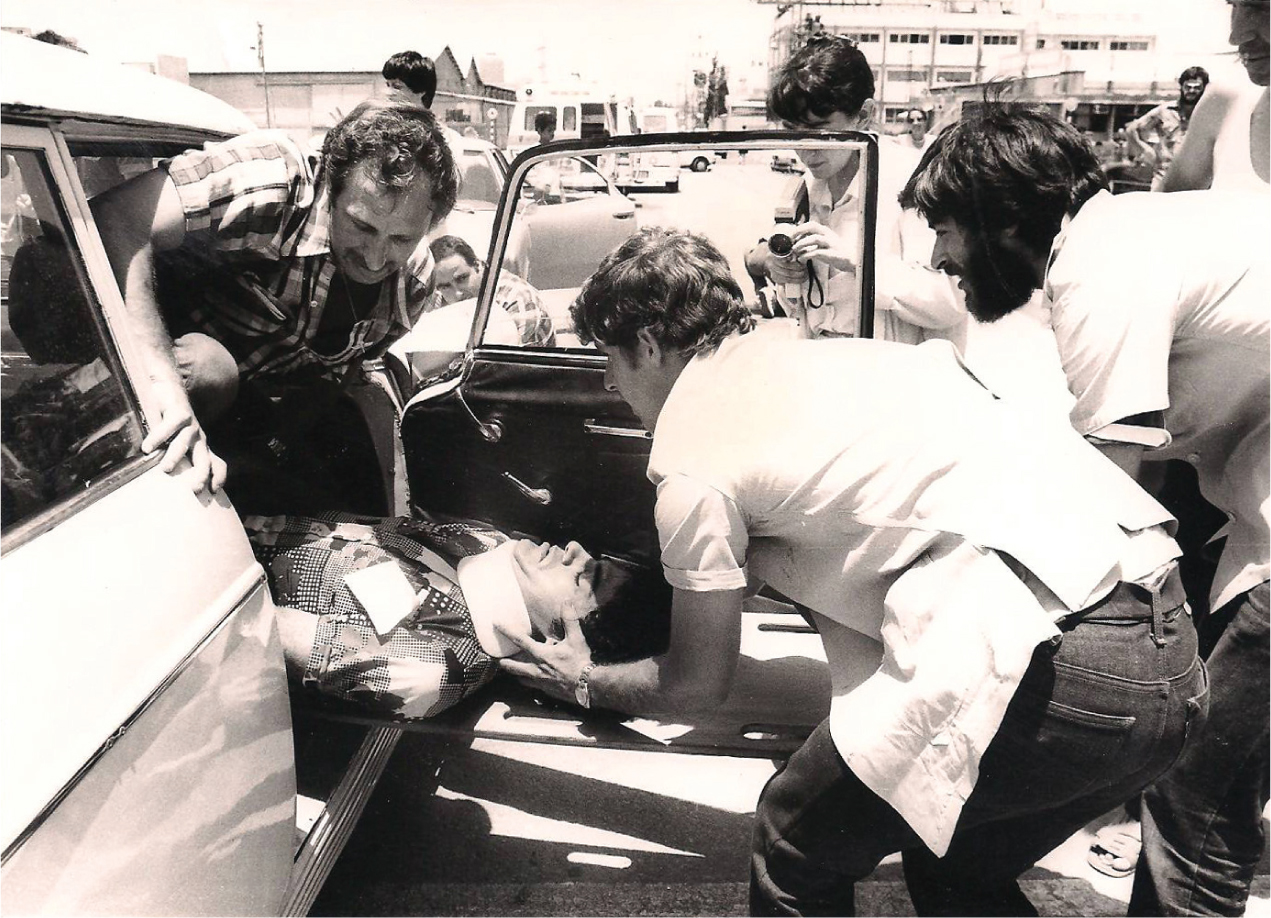 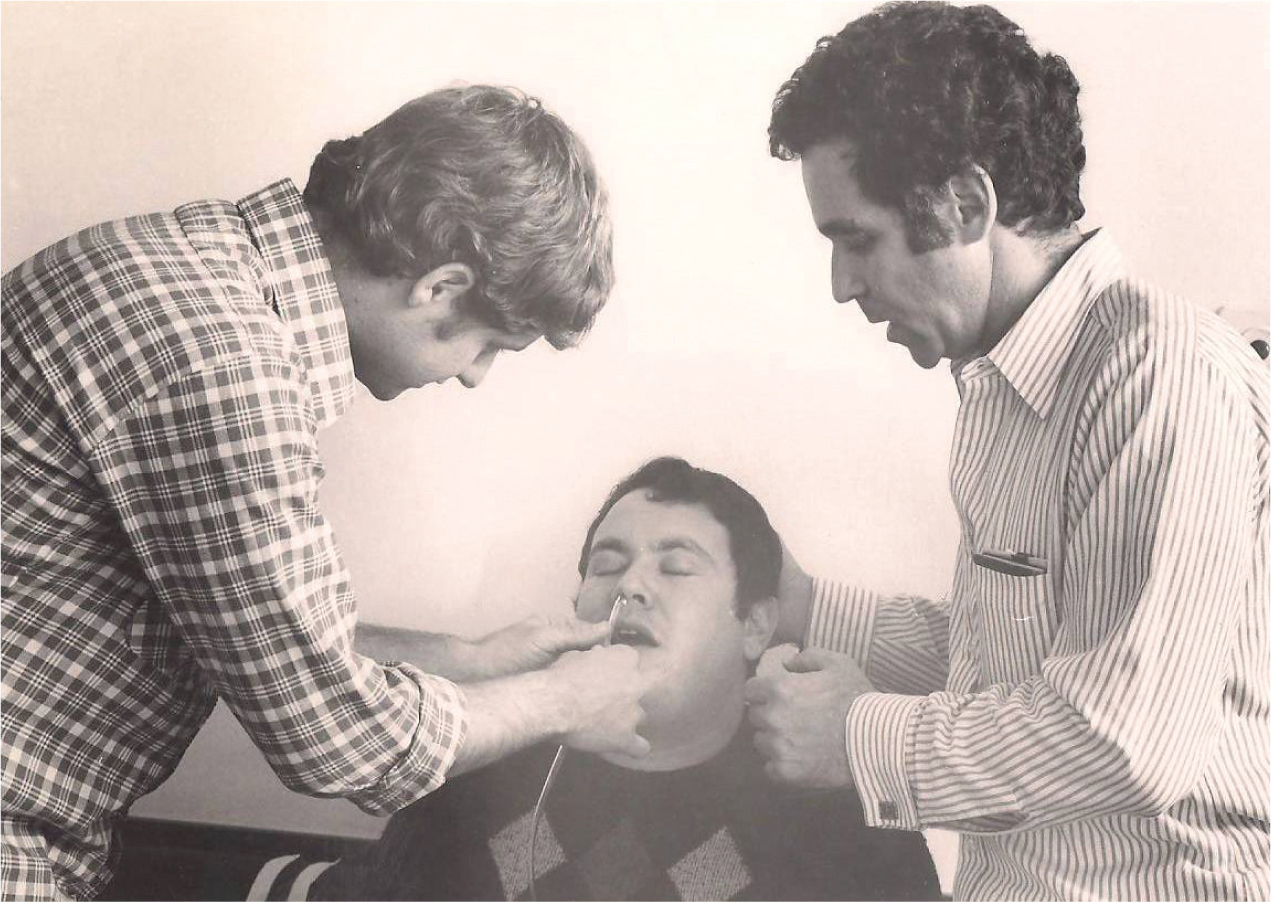 Figure 4. Students practising insertion of nasogastric tubes on each other

In 2015, the Ministry of Health announced the development of a new profession—physician assistant—which will be based on paramedics with an academic degree who will undergo additional training to work in emergency rooms in hospitals.

As of October 2014, there are 2 250 qualified paramedics in Israel. There are four training frameworks for paramedics:

Graduates of all training frameworks usually become paramedics in their yearly military reserve service as soon as they finish their training.

All the training frameworks require a robust period of clinical training (100 8-hour shifts on average). Currently there is no government-approved exam certification for paramedics. Rather, certification and licensure are made by the EMS system. MDA currently has approximately 450 active working paramedics, and a few dozen paramedic volunteers. To make sure all volunteers maintain a certain level of competence they are required to perform a minimum of four 8-hour shifts every month.

The legal framework for paramedics in Israel is based on the historical model of a paramedic working with a physician. In the last couple of years the Ministry of Health is developing legislation to reflect the changes in the profession. While historically paramedics only worked within the national EMS system, paramedics today work in private EMS systems, urgent care centres, factories, and emergency rooms with an ever-expanding scope of practice.