It also identifies similarities between Australian and UK ambulance systems, which may assist new graduates to overcome the transition shock. This article suggests that transition shock is not solely related to Australian graduates moving to the UK, and may well be present for graduates moving to comparable international ambulance services in Canada, the Middle East, Ireland and South Africa.

United Kingdom (UK) ambulance services are actively recruiting Australian paramedic graduates (Wallis et al, 2015). In this article, we seek to stimulate discussion by briefly examining the differences and some similarities between the two systems with a view to highlighting potential challenges that Australian graduates may encounter when transitioning into UK Ambulance National Health Service (NHS) Trusts and Foundation Trusts. These challenges may not be unique to Australian graduates transitioning to the UK, and may be applicable to other graduates moving to international ambulance services based on the Anglo-American model of practice.

University paramedic programmes in Australia and the UK commenced as early as 1994 in Australia (Fields, 1994; Lord, 2003) and 1998 in the UK (Carney, 1999). The transition of paramedic education and training from an apprenticeship in-house vocational model to a pre-employment university model increasingly means that new entrants to the profession must first gain a bachelor's degree before applying to an ambulance service for employment.

During tertiary-based paramedic programmes in Australia and the UK, students undertake subjects in core sciences such as anatomy, physiology and pharmacology. Social science subjects such as introductory public health and principles of evidence-based practice, sociology, communication and mental health are also completed (Willis et al, 2009; College of Paramedics, 2014). The development of clinical skills is an important component of the paramedic curriculum in both countries, despite there being slight differences between UK and Australian tertiary paramedic programmes in relation to the clinical scope of practice (see Tables 1 and 2). For example, UK paramedics are required in many ambulance services to intubate and gain intraosseous access (Association of Ambulance Chief Executives (AACE), 2013). Conversely, these skills are only authorised for use by intensive care paramedics in most Australian ambulance services (Ambulance Victoria, 2013; Ambulance Service of New South Wales, 2014; Queensland Ambulance Service, 2015). 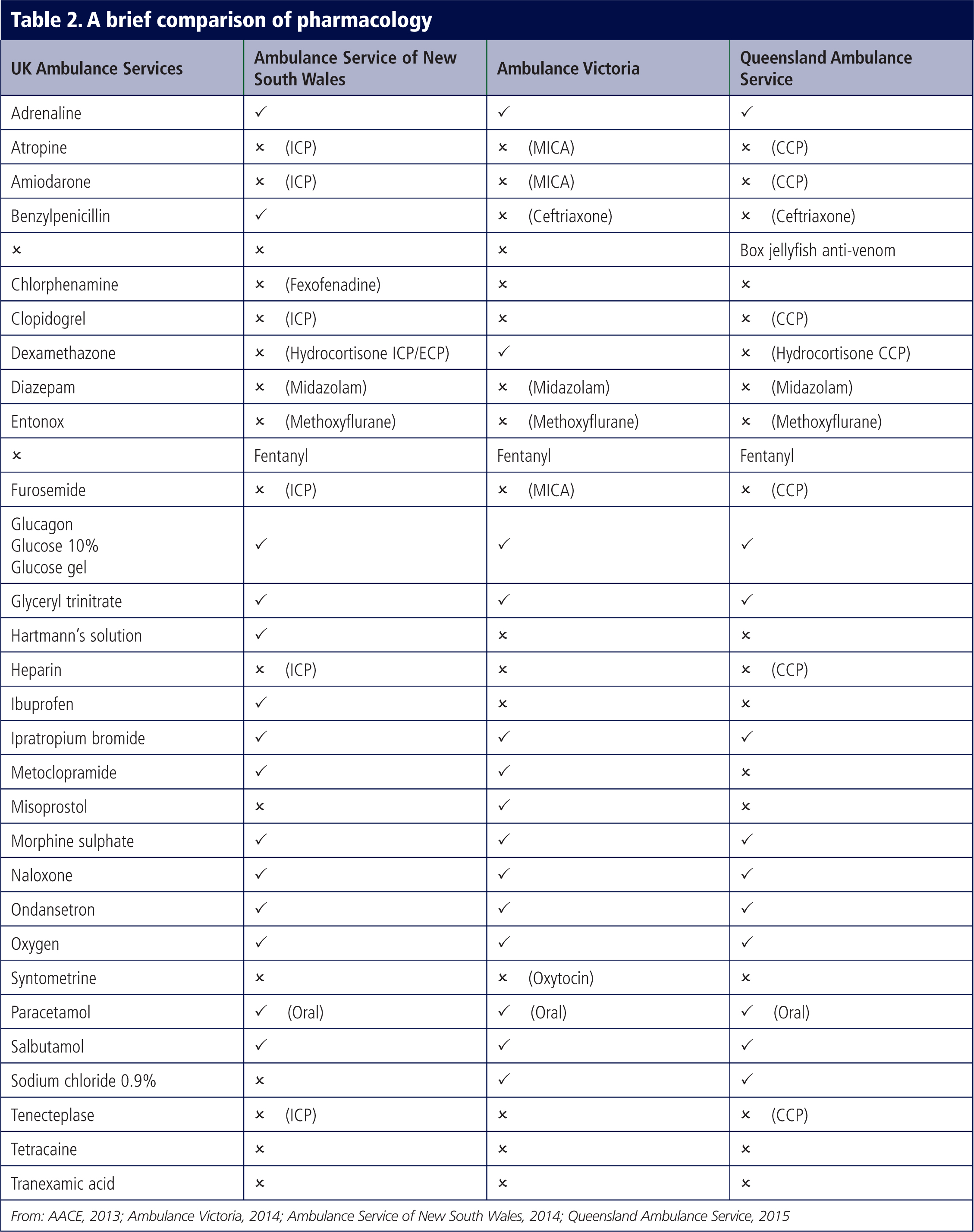 A major discrepancy exists in relation to the duration of clinical placements between the two countries. In the Australasian context, some undergraduate paramedic students acquire as little as 240 hours of ambulance and hospital clinical practicum prior to graduation, while others may accrue up to 1 068 hours (O'Meara et al, 2014). By comparison, in UK paramedic programmes, clinical placements make up 50% of the total course hours (College of Paramedics, 2014), which equates to approximately 2 250 hours of placement time. Furthermore, 25% of the total placement time needs to occur outside of the paramedic setting. Consequently, significant differences are apparent when comparing the clinical placement requirements stipulated by the Health Care Professions Council (HCPC) in the UK with Australian paramedic programmes. Additionally, paramedics in Australia are not currently recognised as registered health professionals, contrary to the situation in the UK. The differences between the education, training and certification of UK and Australasian paramedics are further highlighted in Table 3. 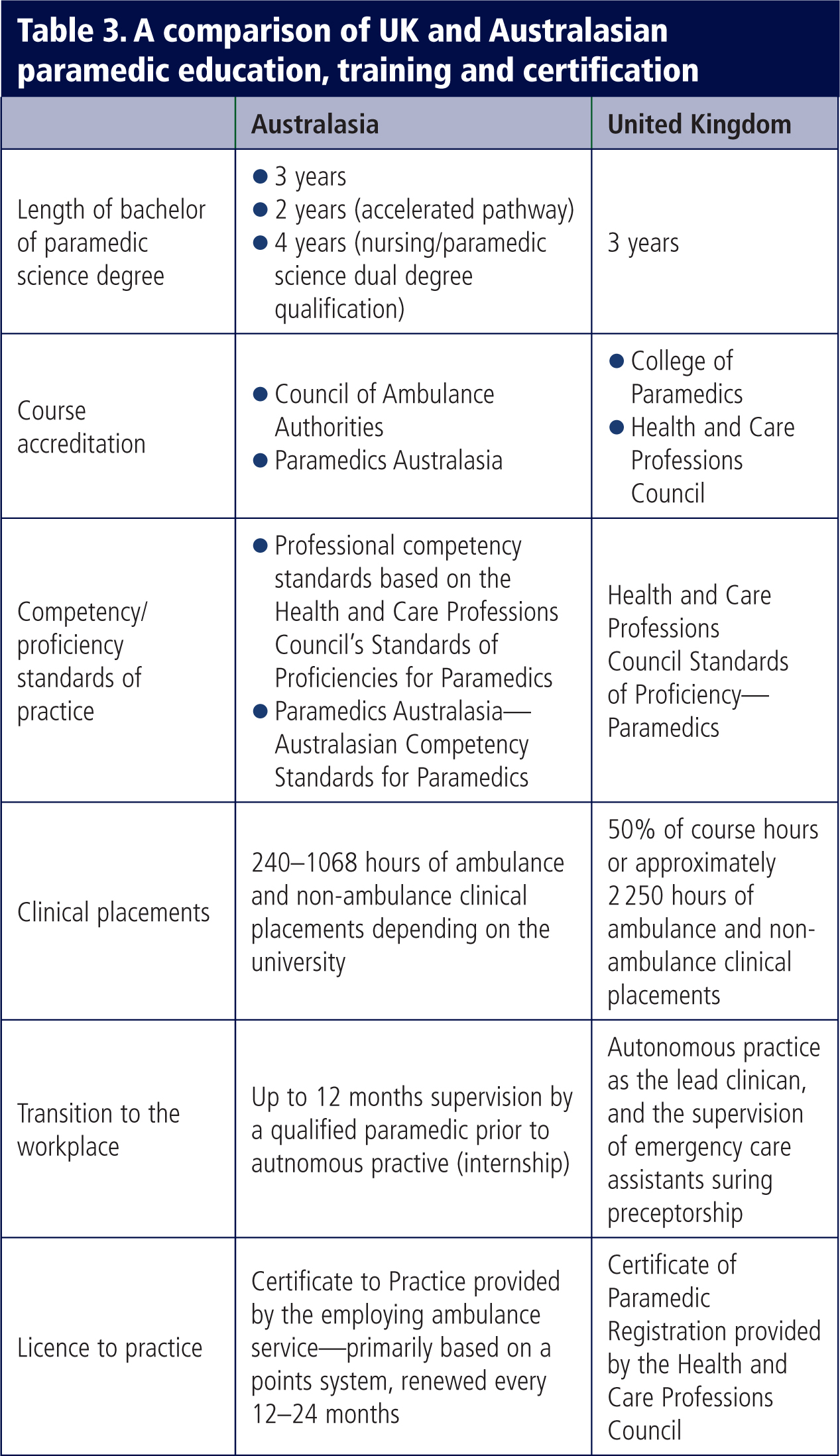 When UK university paramedic students graduate, register with the HCPC, and gain employment with an Ambulance Service NHS Trust or Foundation Trust, there appears to be little to no supervised period of practice during their preceptorship before they are required to work autonomously, and supervise emergency care assistants (Gregory, 2013; College of Paramedics, 2014). Conversely, some Australian ambulance services require paramedic graduates to complete a 12-month supervised preceptorship period (internship) before providing new entrants with a certificate to practice, and allowing them to work autonomously as qualified paramedics (Council of Ambulance Authorities, 2010).

With UK Ambulance Service NHS Trusts and Foundation Trusts actively recruiting Australian paramedic graduates (Wallis et al, 2015), the question must be asked whether or not the differences in clinical practice exposure have a significant impact on the ability of ‘migrant’ paramedics to integrate effectively into the UK ambulance services.

Australian paramedic graduates may encounter a transition shock (Boychuk Duchscher, 2009; Gregory, 2013) while adjusting to their new role as a registered paramedic, because their preconceived expectations may not reflect the reality of practice (Devenish, 2014). Australian graduate paramedics transitioning to the UK are required to work as senior clinicians on an ambulance within 2–4 months of beginning their employment. They will be working in an unfamiliar location, will be required to abide by a different set of practice guidelines, and possibly be required to supervise emergency care assistants who have a lower scope of practice.

Despite UK graduates having undertaken significant amounts of clinical placement during their undergraduate training, this does not necessarily preclude the ‘culture shock’ associated with commencement as a registered paramedic. Research has also shown that new graduates encounter something of a ‘reality shock’ as they undergo a metamorphosis stage, and attempt to gain acceptance whilst transitioning to the workplace as employees (Gregory, 2013; Devenish, 2014; Thompson, 2015). In Australia, there has been some exploration of this issue. The paramedic literature suggests that Australian graduates have significant concerns about their work-readiness, and how a perceived knowledge-practice gap might affect their transition to professional practice with local state-based ambulance services (Waxman and Williams, 2006; Lord et al, 2009; Wray and McCall, 2009; O'Brien et al, 2013; Devenish, 2014). In a recently published model depicting the professional socialisation of Australian and UK university educated paramedics (Devenish, 2014), the importance of a supervised preceptorship period was highlighted. A supervised preceptorship period enables graduates to consolidate their clinical skills and establish workplace routines, while integrating into the ‘workplace culture’ as employees.

Some UK undergraduates may experience programmes in which this integration occurs during the undergraduate period. For example, until recently students at the University of Hertfordshire experienced a ‘sandwich’ year (professional employment year) with the London Ambulance Service NHS Trust during which they worked as ambulance technicians (Williams, 2010). The sandwich year was imbedded into the third year of the four year Bachelor of Paramedic Science (Hons) degree (Williams, 2010). The sandwich year is no longer offered. Due to significantly more undergraduate clinical placement time, UK graduates may arguably be better prepared for the transition to professional practice than Australian graduates transitioning to UK ambulance services. However, despite the increased amount of clinical placement time in UK-based paramedic programmes, experiences gained during clinical practicum are not necessarily identical to experiences gained as a staff member on the payroll (Devenish, 2014). For example, on placements, students are ‘visitors’ in the paramedic workplace, and are not afforded the same level of acceptance and respect as a fulltime employee (Devenish, 2014). Additionally, students may be protected from the politics of the workplace, and confronting cases during clinical placements. The amount of responsibility encountered as an employee is invariably greater than that of a supernumerary crew member on clinical placement (Devenish, 2014).

Research also suggests that after returning from clinical placements, students encounter a ‘hidden’ curriculum which emphasises the high acuity side of paramedic work, when low acuity work makes up much of the reality of practice (Clark et al, 2000; Woollard, 2003; Williams et al, 2012; Devenish, 2014). Consequently, when entering the profession, new graduates may well encounter a different working environment to that preconceived while at university. Research also shows that few graduate paramedics are prepared, through their university's paramedic curriculum, to mentor new staff and supervise emergency care assistants (Dawson, 2008; Donaghy, 2010; Sibson and Mursell, 2010; Edwards, 2011; Devenish, 2014).

Research suggests that both Australian and UK paramedic graduates encounter significant challenges with conflict resolution (Lazarsfeld-Jensen, 2010; Devenish, 2014) and with adapting and changing to fit into the paramedic professional culture (Devenish, 2014). However, without effective opportunities and/or support to transition from student to employee, new staff may develop and execute a precipitous exit strategy from the profession. This may involve leaving the profession all together or taking up a non-clinical administrative role within the ambulance service (Devenish, 2014).

It seems fairly clear that the socialisation tactics employed by a profession can have a direct influence on the morale and retention of new staff members (Devenish, 2014). With the absence of a supervised preceptorship year to provide new graduates with an opportunity to consolidate their learnings, further research is necessary to determine whether the recruitment of Australian graduates by UK Ambulance Service NHS Trusts and Foundation Trusts is a long-term workforce planning solution. This research would ideally be suited to a longitudinal approach, following the progress of Australian graduates over a 2-year period, or the term of their contract.

Having explored several challenges which Australian new graduates may face when integrating into UK Ambulance Service NHS Trusts and Foundation Trusts, it is important to highlight some positive aspects that may facilitate their transition. Both UK and Australian ambulance cultures are very similar (Devenish, 2014), with both systems being historically based on a paramilitary command and control culture (Lazarsfeld-Jensen et al, 2011). Both UK and Australian ambulance systems are based on a clinical practice guideline approach to practice, and have similarities in relation to clinical roles such as paramedic, critical care and extended care (practitioner) levels of practice.

The types of clinical cases encountered are similar (Williams et al, 2012), despite the workload being greater in some UK ambulance services compared to Australian ambulance services. Patient demographics are similar, with both countries facing an increase in the elderly population (Clark and Fitzgerald, 1999; Downing and Wilson, 2004), and both countries are adopting strategies for alternative points of referral for low acuity patients not requiring transport to hospital (Marks et al, 2002; Snooks et al, 2004; Mikolaizak et al, 2013; Ambulance Service of New South Wales, 2015).

Globalisation and the paramedic profession

This article extends current thinking about the transition of university paramedic graduates to the workplace. It has raised a discussion point which questions whether Australian paramedic graduates integrating into NHS Ambulance Service Trusts and Foundation Trusts may encounter greater challenges than their counterparts who have gained employment with Australian ambulance services. The reason for this transition shock relates to a lack of a supervised preceptorship year for those new graduates who relocate to the UK, where the new paramedic can consolidate their university learnings. Instead, they need to adjust to the role of a registered paramedic with relatively little experience. However, several similarities between the two systems are identified, which may assist in the transition of Australian paramedic graduates into UK Ambulance Service NHS Trusts and Foundation Trusts. Further research is essential to examine the experiences of Australian university graduates making the transition to UK ambulance services to discuss in greater detail the issues identified in this article. The findings from this future research could also be transferable to graduates moving to other international ambulance jurisdictions, as this phenomenon is becoming increasingly likely with the globalisation of the paramedic profession.